You are here: Home / Podcast Episodes / Perimenopause vs Menopause | PYHP 057 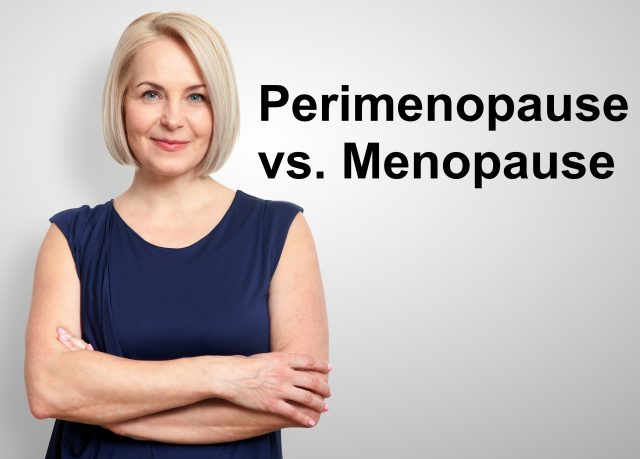 Both perimenopause and menopause can start between 35 to 50years old.  As the word states, perimenopause starts before menopause. While that might seem obvious, sometimes it is hard to differentiate between them.  I have had many patients tell me they are in menopause but are really in perimenopause. You might be asking, ‘why is it a big deal to know the difference?’.  That can come down to the treatment. Treating a woman for menopausal symptoms when she is in perimenopause can not only be ineffective. But can make the symptoms worse as well as new symptoms.

In perimenopause, if you still have your uterus, then you will be having a period.  The periods can change from your “normal.” But you will still be having a regular period.  What you might notice are periods might be heavier, longer, more spotting, more cramping. Often this can lead to low-iron/anemia.

This is the time that women find out that they have fibroid(s).  Fibroids are benign growths in the uterus and during perimenopause can become “active,” causing cramping, heavier periods and more spotting.  This is usually the time women will get a hysterectomy. The periods are so “off” that most doctors only recommend a hysterectomy. Now that might correct the period “issues.”  But it does nothing for the other symptoms.

In menopause, the periods become less frequent.  Might miss one or many months at a time. The period that you do have can come at any time. They might be light one month and then four months later a heavy, painful period.

It is common in both perimenopause and menopause to gain weight.

What happens if you have had a hysterectomy and still have your ovaries and really cannot determine if you are in peri or menopause?

Labs can be very helpful in determining your hormonal status.  But there is a lot of issues with interpreting the lab results.  I have had many patients that have claimed that their doctor told them they were in menopause based on their labs, but they were not.

For example, a patient I recently saw, Kim told me that her doctor said she was in menopause 5 years ago.  But she had regular periods, and on her labs, there was estrogen present in her blood without taking it as a medication.  She felt tired, forgetful, super irritable, terrible periods, and could not sleep through an entire night. Not to mention Kim went from a size 7 to 12 without much change in her diet and exercise routine.  After speaking with Kim and looking over her lab work, she was definitely not in menopause.

Kim was dealing with symptoms of perimenopause.  But the lab work can be misleading on how you interpret it. While her doctor tried to treat her for menopause with estrogen.  Kim took estrogen and immediately gained 10 lbs and started bleeding nonstop. This is because the treatment for menopause to 180degree different from perimenopause.

Perimenopause has many symptoms.  You do not need to “just deal with it,” “wait it out for menopause” or take medications that are ineffective and habit forming.  Be sure to check out our website because we have a perimenopause course to help you navigate through perimenopause with effective options to help with your symptoms.